Move SAP to the cloud with fewer resources

Our automated runbooks map out S/4HANA migration activities in great detail. By creating a single source of truth, collaboration between teams becomes frictionless. With every task listed and assigned to an owner, you can check for upstream and downstream dependencies, pre-empt potential blockers, and monitor progress in real time. Cutover offers the only solution that allows you to make dynamic decisions as things change.

Ingest data from planning tools to pre-populate existing plans or map out your implementation schedule. Ensure governance and security steps are scheduled and rehearse and visualize your entire program.

Use templated runbooks to orchestrate all the technology involved and keep your project teams in harmony. Replace your disparate channels with one automated notification platform. Track progress at an aggregate level through the migration dashboard. 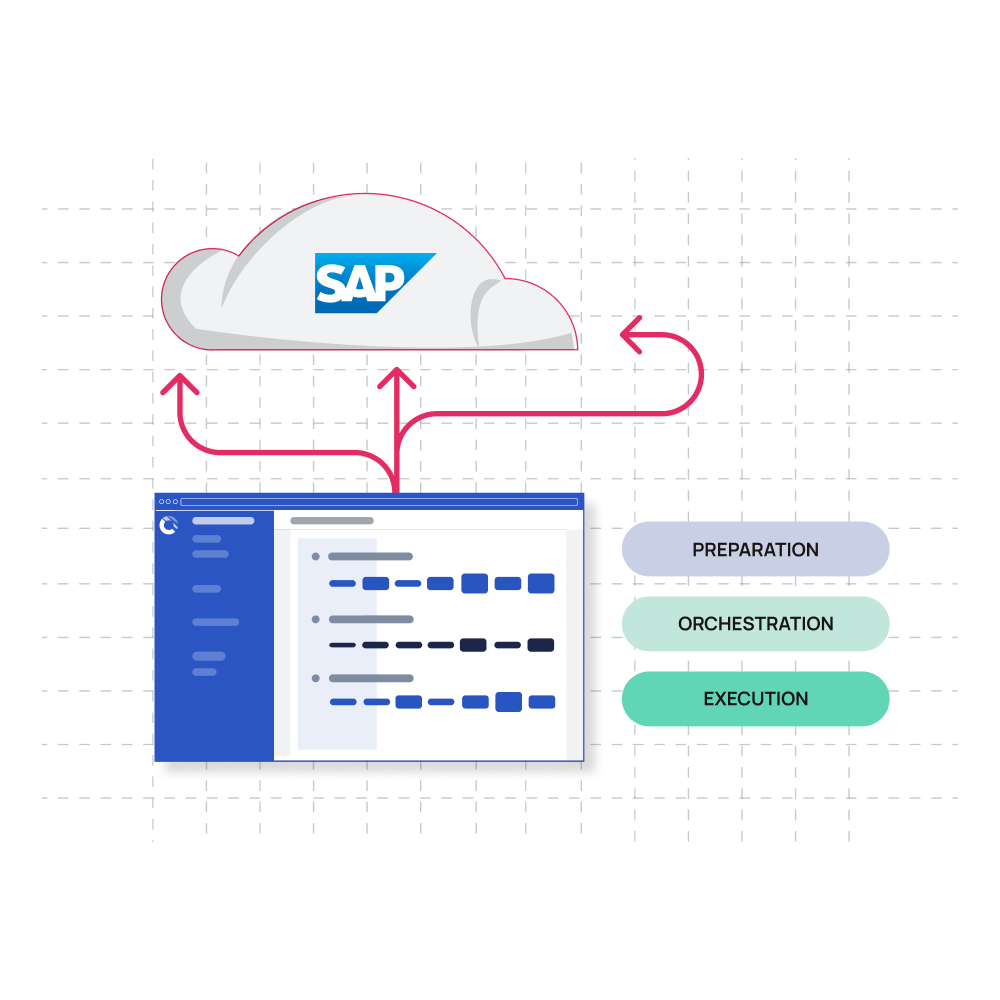 SAP platform rollouts are too complex for spreadsheets.

A pharmaceutical company is undergoing a global SAP platform rollout, which is split by geography due to its size and complexity. After completing 90% of the SAP rollout in the Americas using spreadsheets, disjointed processes, messaging channels, and a weekly call, the Senior Director realized that to be successful with the rest of the rollout they needed better planning, orchestration, visualization, and communication capabilities than spreadsheets and calls could provide.

The Senior Director came across Cutover through a Cutover partner. The company spent nine months planning the EMEA program in Cutover, pulling existing spreadsheet data onto the platform and building runbooks that were 3,000 to 4,000 lines long for the release, involving over 4,000 tasks and 200 people.

The first wave of this program, which is the largest and most complex and involved migrating a significant amount of data, is now complete. The EMEA program consists of three waves, and by the end of the final one everything will be live.

Where Cutover made the difference:

Wave one of the EMEA project was a success, and now the company is gearing up for waves two and three in Cutover. They have also started planning and rehearsing the SAP rollout in Japan using Cutover.

Now that they are familiar with Cutover and the benefits it provides, they are also looking to use the platform for other use cases including supply chain manufacturing and releasing and testing systems that operate their chemical plants.

"Using Cutover we have total alignment, visibility and success in all objectives. We have full confidence that we will complete the program early. What else can we solve?!" - Global Lead "Using Cutover, we have total alignment, visibility, and success in all objectives across our SAP rollout and full confidence that we will complete the program early."

Discover how organizations like yours are migrating faster and more cost-effectively to SAP S/4HANA using Cutover. Our team can show you how to plan, orchestrate, and realize your SAP implementation with our automated runbooks.
Book a demo
Get in touch

Get the latest Cutover updates and insights in a monthly newsletter

By subscribing you agree to with our privacy policy and provide consent to receive updates from our company.